Stock Photo News
You are at:Home»Microstock News»Dreamstime Shares Memorable Events and Images from 2011

Nashville, TN – December 14, 2011 – 2011 was undoubtedly an eventful year for many reasons. From uprisings across the Arab world to the British nuptials,there have been myriad opportunities for memorable images over the past twelve months. With this in mind, Dreamstime, a leading stock photography community, is taking a look back on a few of the more notable events of 2011 and sharing the images that go with them. 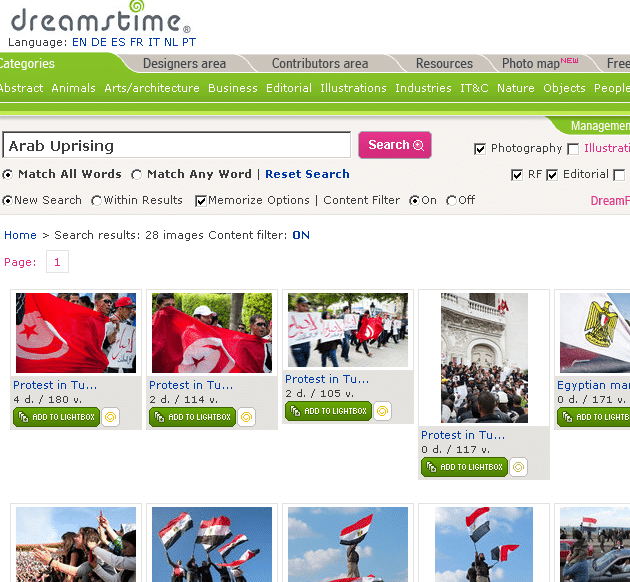 Arab Spring – Revolts across the Arab world that began in December 2010 continued full force this year, with revolutions in Egypt, Tunisia and Libya leading the way as citizens rose up against oppressive dictatorships.

Japanese Earthquake and Tsunami – On March 11, an 8.9 magnitude earthquake rocked Japan, triggering a 30-foot tsunami and producing widespread devastation, as well as a worldwide reliefeffort.

The Royal Wedding – More than a hundred million viewers around the world tuned in to watch Prince William marry Kate Middleton on April 29 in London.

Final Space Shuttle Launch – After a 30 year program, NASA ended its space shuttle missions with the return of Atlantis to its home port on July 21.

Occupy Wall Street – This worldwide protest against social and economic inequality, high unemployment, greed and corruption on the part of big corporations got its start in September in New York’s Zuccotti Park.

Dreamstime is a distinguished leader in stock photography, a major supplier of high qualitydigital images to the world's largest advertising agencies, national and international magazines, and film and television production companies. Today, with more than 12.6 million images, Dreamstime is currently the second leading agency in total customers with over 12 million unique visitors monthly to the site, making it one of the most popular web sites in the world. The acceleration in numbers overall makes it the fastest growing stock photo agency worldwide. In addition to the current 300,000 free images available, Dreamstime's active gallery is updated by the second with photos from the site's 127,000-plus contributors. For more information on Dreamstime, please visit: www.Dreamstime.com.