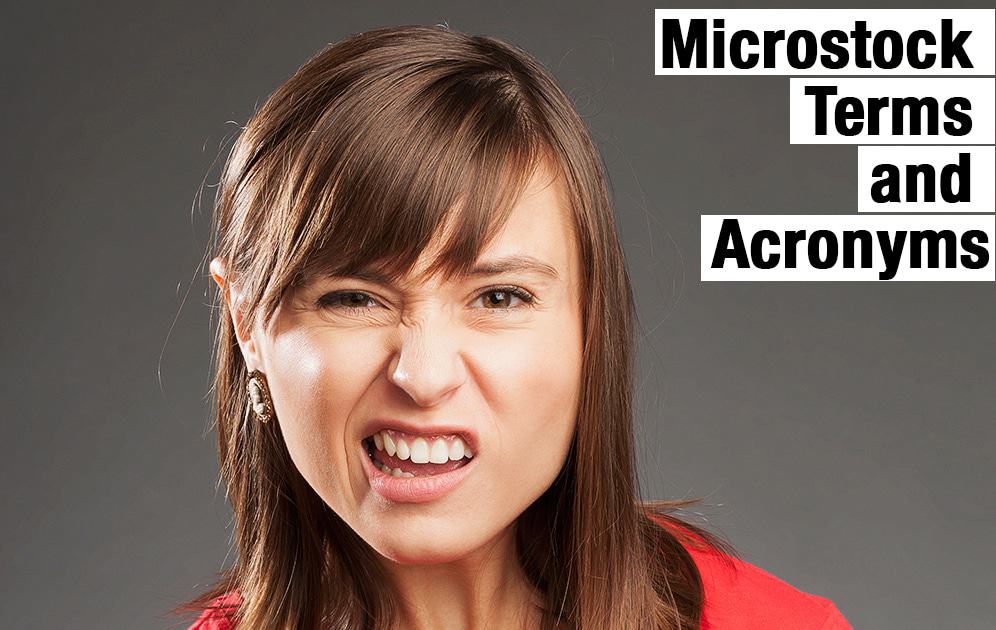 We tried to compile a list of commonly used terms and acronyms in the Microstock industry that might not be intuitive to understand for newbies, so we can always point them here when they ask “What does it mean?”

In some cases these were written a bit tongue-in-cheek, so don't take them all too seriously. 😉

Acceptance Rate – Number of images accepted for sale in comparison to the images uploaded to an agency; rates depend on strictness of the agency and can range from below 50% (usually for beginners) to above 90% (for experienced contributors)

API – application programming interface; offered by some agencies to connect third party solutions, either for contributors or customers

BME – Best Month Ever. Can be meant as number of downloads and/or royalties earned

BMY – also: BMTY Best Month this Year. Can be meant as number of downloads and/or royalties earned

CGI – Computer Generated Image, not shot through a camera but generated with specialized programs

Credit Pack – as opposed to subs, the client pays for a certain amount of credits and can exchange these for images priced in different credits by size

DP – DepositPhotos, a newcomer showing some success in entering the microstock market segment

Editorial Image – Image that can not be licensed for advertising or merchandise use due to lack of releases for the people, places or trademarks visible

Editorial Use – Not to be confused with Editorial Image, as also commercially usable images can be used within an editorial context to illustrate articles or news

Exclusive – Option offered by several agencies to submit certain images or the whole portfolio exclusively to one agency, usually rewarded with higher royalties

Image Pack – as opposed to subs, with an image pack the customer buys a certain number of downloads to be used up over a longer period of time (usually one year)

IS – iStockphoto, the inventor of the microstock segment in licensing

LCV – Low Commercial Value; term for images which are in general technically subpar and/or of a subject that is not demanded often by customers

Lobo – sometimes referred to as “pieman”; a mythical creature in the dark realms of microstock forums, specifically those hosted by iStockphoto

Midstock – somewhere in between the Macrostock and Microstock segment, with prices typically ranging from $10 to $100

Mobile Stock – Image shot and/or processed with mobile devices like smart phones and tablet computers; the exact definition can vary between agencies and contributors

MR – Model Release; formal document signed by a person to allow the photographer to license his/her likeness for commercial purposes

PPV – Pay per View; innovative license model allowing the customer to use images without fixed fee but paid later per impression

Referral – A contributor or customer referred by an active member, usually being rewarded with a fixed fee or a percentage of sales/purchases

RM – Rights Managed; license priced based on a specific use and time frame, can be from months to years

ROI – Return on Investment; money made back compared to the money spent on an image or shoot

RPD – Royalty per download; the average amount made by the contributor for each of their licenses sold, typically below $1 for microstock

RPI – Return or Royalties per Image; total royalties earned divided by the number of images in a contributor's portfolio, usually per month

SS – or SSTK; Shutterstock, a microstock agency introducing the subscription model to broad parts of the global market

Subs – Images licensed through a subscription program, usually paid at a fixed fee

UL – Upload, file send to an agency for licensing

Yuri – fictitious photographer who changed the face of microstock

Did you miss acronyms or a term?