The headline of the changes as highlighted by Shutterstock is a reduction in the minimum they require for the monthly payout: Until now, contributors needed to have earned at least $75 to receive a payout in the following month. This will now be lowered to $35. Great for contributors which are not earning a lot on Shutterstock. BigStock (owned by Shutterstock as well) already has a request based payout system that allows contributors to withdraw money after reaching a minimum of $30. Overall good change! 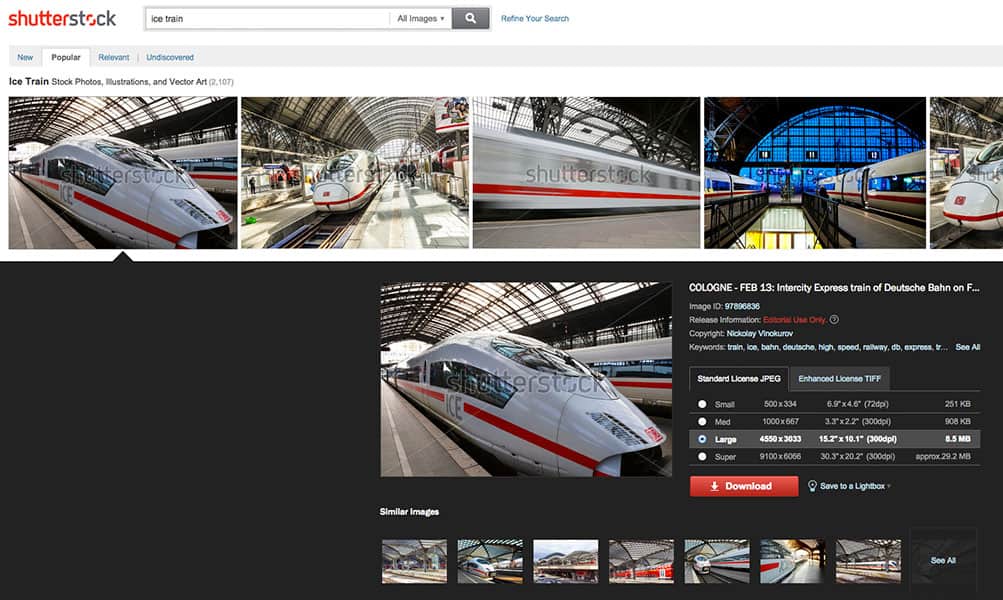 Screenshot of Images for “Editorial Use Only” at Shutterstock

Shutterstock also made changes to the Terms allowing them to sell licenses for “Editorial Use Only” images to certain clients even for “non-editorial” purposes.

The background to this most likely lies within the very generic nature of royalty free licenses, in microstock in particular: The commercial license is basically allowing all customers to do almost everything (within legal and moral boundaries) with the images they licensed. In this context, the review and acceptance of images had to be very strict, far stricter than it used to be in earlier years. This is also owed to the broader customer based microstock has built – less professional images users but also bloggers and small companies building their own websites.

In general and in most countries, the laws would allow much more uses than the commercial RF license of Shutterstock and other agencies do. For example, the “Freedom of Panorama” rules might allow customers in many European countries to use skylines of cities even if the contain some logos. Whereas this typically would have been rejected for the commercial collection, customers could be allowed to use those images on a case-by-case basis.

Another example would be the use of protected designs: The German high speed train ICE has a protected design (red stripe on white background) and will be rejected for commercial use at most microstock agencies. This is basically because the generic RF license would allow competitors to use the images for their own advertising – which would be strange but legally could happen. Whereas a travel agency offering bookings of tickets for the ICE could most likely use those images as part of their partnership agreement with Deutsche Bahn AG.

Shutterstock wants you not to deal with misuses yourself

While the first change most likely only offers advantages to a few contributors and no disadvantage to others, and the second change shows potential for more royalties, this third major change might be difficult to take for some contributors as it protects the relationship between Shutterstock and their clients.

In this changed section 13 of the new Contributor Terms, Shutterstock insists that you will inform them of any misuse that you learn about if the image in question was (potentially) licensed through Shutterstock. You also agree to not follow up with customers or end users on potential misuse without prior written consent given by Shutterstock.

It is obviously not in the interest of agencies nor the customers (or the stock photographer community in general) if single contributors start taking actions against what they judge as misuse of images. While there are some cases that are pretty clear, in most cases the use is within a “grey area” that could be judged differently by different viewers. Also, the complexity of the laws does not only come with the license terms but also with the local interpretations of those terms that might vary from country to country. Even lawyers sometimes struggle to give definitive answers if a certain use would be allowed or not. Going after customers who may have paid for a use and may have just made a mistake or judged a term differently than the photographer did, demanding to take an image down or even threatening with legal actions, certainly isn't the best strategy in all cases. Sometimes, it is just a matter of acquiring a different license, so Shutterstock wants to deal with those matters to turn a problem situation into a profitable one for all parties involved.