CALGARY, Alberta: Oct. 17, 2011 — October marks the fifth year iStockphoto has been in the stock video business. To celebrate, the company is discounting video purchases by 15 percent from October 17th to 23rd.

Reduced advertising budgets and the explosive demand for online video content have allowed the stock video industry to evolve at a highly accelerated pace. Today, iStockphoto’s video library contains nearly 400,000 files, to which a team of more than 6,500 videographers is adding roughly 2,500 files on a weekly basis.

Today stock videos are used in everything from national news programs to documentaries, films and web advertising. The biggest current trend in both demand and the offerings at iStockvideo, is authenticity through the use of models, scenes and lighting that seem real and not too “ideal.”

“Thanks to reality TV, the smart phone cameras and social media we’ve quite literally become used to seeing reality unvarnished, “ said Jim Goertz, director of video content development at iStockphoto. “Some of the things we used to strive to perfect become glaring imperfections in that they seriously undermine credibility. Now, effective art must imitate reality.” 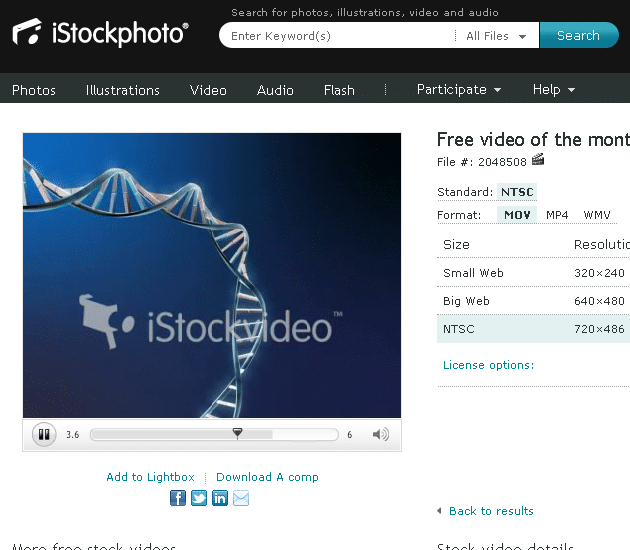 Besides realism, other major trends in stock video include:

Here are sample cutting-edge stock videos on iStock that demonstrate new editing techniques, and shooting styles that Goertz believes will be in greater demand over the next few years.

Zoom Out to Earth from Wireless Phone, by UK-based member multifocus

This is a high-definition animation zooming out into space from a city park. Real actors make up this difficult to achieve clip. A world surrounded by networks and computer wireless data.

Note the very real look and lighting of the restaurant and the actors in this piece, which could be easily used to demonstrate everything from friendship to a quality restaurant experience.

This clip represents the new trend of mini-films. A car pulls into a car park and two characters cautiously swap briefcases, one of which has a bundle of cash in it.

In 2006, the biggest purchase trends were toward simpler themes such as water or businesspeople, although some conceptual themes were popular, such as this animation of a DNA strand. To honor its “first-ever” status, is the free video of the month in October:

Overall, the top videos sold at iStockphoto globally represent themes that can work in many contexts and cultures, such as technology, spirituality, and hectic lifestyles. iStock expects clips like this to remain in high demand as our global concerns become more homogenous and more buyers enter the market.

“When we first got started, stock video clips were relatively simple. Things like the handsome geriatric couple walking on the beach or the multiracial handshake were the norm,” said Goertz. “Today videos have become much more stylized and conceptual. It is now common for contributors to invest heavily in elaborate sets and lighting for a shoot, which allows them to come up with some genuinely mind-blowing footage.”

iStockphoto offers easy, affordable inspiration with millions of vetted, royalty-free photos, illustrations, video, audio and Flash® files. Using the most advanced search in the business, customers download a file every second from a collection of more than ten million files for business, marketing and personal projects. iStockphoto started in 2000, pioneering the micropayment photography business model, and has become one of the most successful and profitable user-generated content sites in the world. iStockphoto pays out more than $1.9 million weekly in artist royalties. iStockphoto is headquartered in Calgary, Alberta, Canada, and is a wholly-owned subsidiary of Getty Images.